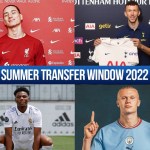 Football Transfer Window 2022: Aurelien Tchouameni is the latest player to officially seal a transfer from AS Monaco to Real Madrid in the Summer window. Uruguayan striker Darwin Nunez completed his transfer from Benfica to Premier League giants Liverpool. One of the most eye-catching transfers of the summer was Erling Haaland joining Manchester City following the footsteps of his father. Follow InsideSport.IN for the latest football transfer news and updates.

Tottenham and Brighton have just signed all the paperworks for Yves Bissouma deal. Full agreement on €29m deal & add-ons, all good also on payment terms details.

Inter have made an opening bid today for Romelu Lukaku: €5m loan fee. Chelsea have rejected this proposal and Inter are waiting for a price tag – talks will continue this week.

Lukaku has told Boehly and Tuchel he only wants Inter move, so he’s pushing. pic.twitter.com/eYFl6FA8nT