India vs Belarus Highlights: India 0-3 Belarus – A second-half performance from Belarus saw the European side defeat India comprehensively 3-0 to win the encounter. India played well in the first half and went into the break at 0-0. However, a motivated performance from Belarus saw the team change the tides to their favour and win the game. Follow InsideSport.IN for the latest sports news and updates.

India had a comfortable first half where they defended well but was resolute to not concede. Belarus easily dominated the possession of the ball and the battle of the midfield, but couldn’t deliver a decent shot at the Indian goal, owing to a resolute defense from the Indian side.

Belarus dominated the entire second half and took an early lead from a supreme volley by Artsem Bykau. India decided to stick to their tactics where they wanted to absorb the Belarus attack and then attack them on the counters. The strategy failed to work as Belarus grabbed yet another goal. The second goal from Salavei Andrei saw India switch their tactics to launch more attacks.

However, the Indian attacks yielded no result as Belarus cleared off the Indian pursuits. In the second minute of added time Hramyka Valery scored the third goal and finished the game for his side to bring his side a 3-0 victory.

90+2′ – GOAL!!! The killer blow comes from Belarus. A deft finish in the added minutes of the game by Hramyka Valery sees the European side taking a 3-0 lead.

83′ – India parries a couple of attacks. Poor passing in the final third sees Belarus gaining possession of the ball.

59′ – The second change in the game. VP Suhair is replaced by Aniket Jadhav. 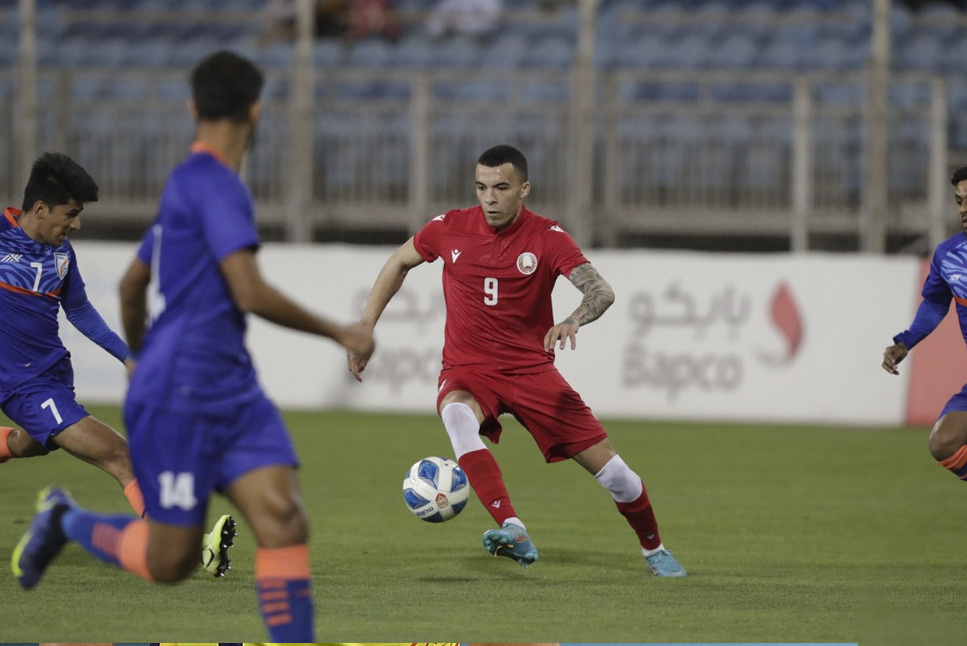 45′ – The long whistle of the ref indicates the end of the play. A gritty defense by India sees off every threat from Belarus.

44′ – Free kick for Belarus in a dangerous place. A couple of years outside of the box. The ball is floated in high, but firm defense from India has no problems to clear out the Belarus advancements.

39′ – A brilliant counter-attacking move from India. Manvir in the box fails to keep the ball under his control to slot it at the back of the net.

35′ – We approach the final 10 minutes of the first half. Belarus obviously has registered more attacks, but none of them has been threatening.

25′ – India eyeing to win the battle in the midfield. Belarus launches barrages of attack. India firm in defense, occasionally attacking in the counters.

15′ – Rock solid defending from the Indian defenders as they weather the Belarus attack force.

5′ – Early pressure from Belarus, fails to capitalize chances, Balloons the ball over the post.

3′ – Roshan with an opportunity, on a break, blasts the ball wide.

1′ – India trying to build the attack from the back.

KICKOFF! India get the proceedings underway!

Belarus are currently ranked 94th in the world which is 10 places above the Blues Tigers. India take on Belarus in an international friendly at the Bahrain National Stadium on Saturday.

If you don’t take risk, you will never succeed, says Stimac ahead of Belarus clash 🙌🏼

Against Bahrain, Danish Farooq, VP Suhair and Roshan Singh impressed on debuts and could feature against Belarus. With Sunil Chhetri and Sahal Abdul Samad not making the trip to Bahrain, the onus is on the likes of Rahim Ali, Liston Colaco and Manvir Singh. India will need to punch above their weight to pick a win against a team ranked 10 places above them.

Belarus have won just two in their last 10 games, losing eight. They have a full strength squad available to play the Blue Tigers.

Igor Stimac’s men went down 2-1 against Bahrain in the first of the two friendlies they were slated to play in Bahrain as part of their preparation for the third and final round of the 2023 AFC Asian Cup qualifiers.

Belarus are also set to play Bahrain in a friendly as they prepare for their games in the UEFA Nations League.

When will India vs Belarus kick-off? Date

The International Friendly between India vs Belarus will kick-off on 26th March, 2022

What time will India vs Belarus kick-off? Time

Where to watch or stream India vs Belarus LIVE in India?

The All India Football Federation (AIFF) has confirmed that there will no live telecast or stream for India’s friendlies which includes India vs Belarus.

“Despite our best efforts in working with the Bahrain FA to live telecast and stream the International Friendlies against Bahrain and Belarus, owing to lack of support & subsequent technical feasibility, it won’t be possible to telecast the matches in India,” read a statement from the Indian FA.

How can India qualify for the 2023 AFC Asian Cup?

The third round of qualifiers is the final frontier to overcome before qualifying for the AFC Asian Cup. In this round, 24 teams will compete for 11 available slots. The 24 teams are divided into six groups and would now play single round-robin matches in six centralised venues. The group winners and the best five runners-up across all groups will qualify for the Asian Cup. India have been drawn with Hong Kong, Afghanistan and Cambodia.

India vs Belarus LIVE: Igor Stimac and Co desperate for positive result against Belarus in their second International Friendly after loss to Bahrain in the previous match