RCB vs KKR LIVE Score – IPL 2022 LIVE: Royal Challengers Bangalore vs Kolkata Knight Riders – Faf du Plessis registered his first win as RCB captain as the Play Bold Army registered a win in a low-scoring thriller against Kolkata Knight Riders on Wednesday. Chasing 129 to win at the DY Patil Sports Academy Stadium, it took some final over heroics from Dinesh Karthik to seal the tie and get RCB their first points of the season. Earlier, Wanindu Hasaranga picked up four wickets to help bowl out last year’s finalists for a paltry 128.  Follow RCB vs KKR LIVE Updates and IPL 2022 LIVE Updates with InsideSport.IN

RCB captain Faf du Plessis won the toss and put KKR into bat and his bowlers instantly delivered, with Mohammed Siraj and Akash Deep struck thrice in the powerplay. KKR looked to attack from the go and kept losing wickets with Wanindu Hasaranga spinning a web around the KKR middle order.

Hasaranga picked up the wickets of Shreyas Iyer, Sam Billings, Sheldon Jackson and Tim Southee in a fine spell of bowling as KKR struggled to even get to the 100-run mark. Andre Russell slammed some lusty blows in the middle but was outdone by Harshal Patel. KKR were down at 101/9, but Umesh Yadav and Varun Chakravarthy added some vital runs for the last wicket to get KKR to 128.

In response, Umesh Yadav and Tim Southee had RCB reeling at 17/3, with both Test match specialists extracting good seam movement from the track. David Willey and Sherfane Rutherford curbed their attacking instincts and patiently put on a 45-run stand before Sunil Narine struck and sent Willey packing.

RCB surprisingly promoted Shahbaz Ahmed and the moved worked like a charm, with the left-hander scoring a quick-fire 27 to bring Bangalore right back into the contest. However, a late twist saw Shahbaz, Rutherford and Hasaranga all depart in quick succession as KKR tried their best to defend a modest total. However, the experienced Dinesh Karthik and Harshal Patel got RCB over the line for their first win of the season.

18th over: Tim Southee into the attack

17th over: Narine to finish his spell

16th over: Chakravarthy back into the attack

15th over: Tim Southee into the attack

14th over: Umesh Yadav into the attack

13th over: Andre Russell into the attack

9th over: Sunil Narine to continue

8th over: Varun Chakravarthy into the attack

7th over: Sunil Narine gets into the attack

6th over: Andre Russell into the attack

5th over: Umesh to continue

4th over: David Willey to continue

3rd over: Umesh Yadav to continue

2nd over: Tim Southee from the other end

19th over: Akash Deep into the attack

18th over: Harshal Patel to continue

17th over: Mohammed Siraj into the attack

16th over: Harshal Patel to continue

15th over: Hasaranga into the attack

14th over: Harshal Patel to continue

13th over: Shahbaz Ahmed into the attack

12th over: Harshal Patel into the attack

11th over: Hasaranga to continue

10th over: Mohammed Siraj back into the attack

9th over: Wanindu Hasaranga to continue

8th over: Akash Deep to continue

7th over: Wanindu Hasaranga into the attack

6th over: Akash Deep to continue

5th over: Siraj comes back into the attack

4th over: Akash Deep comes into the attack

Akash Deep strikes in his first delivery. Venkatesh Iyer is caught and bowled for 10 runs.

3rd over: David Willey to continue

2nd over: Mohammed Siraj from the other end

Ajinkya Rahane and Venkatesh Iyer to open for KKR. David Willey to open the bowling for RCB.

At the time of toss, Faf du Plessis said: “We are gonna bowl. The pitch looks similar but it feels a little bit tacky. A lot of positives, the first 3-4 overs were challenging, the way we batted through. From bowling perspective, you are expected not to get everything perfect. Same XI. Nice to start the tournament like that, hopefully I can do that again.”

Kolkata captain Shreyas Iyer said: “I would have loved to bowl as well. Dew plays a massive role. The bowlers did an amazing job, made it easy for the batsmen. Now it’s going to be a test for us to come in and bat and see to it that we get a good total. It’s just a work of execution. Tim Southee is coming in for Shubham Mavi. That’s the only change we are making.”

Pitch report: “The wicket looks a lot drier than the first game, not as much live grass on the surface. I still feel it’s going to be a good wicket. The boundary size isn’t that big, straight is pretty small. If Kolkata can get a good base upfront and Andre Russell can come in, he is definitely going to clear and hit some big sixes here. I’ll definitely bowl first. It does get wet here, quite tricky to control,” reckons Morne Morkel. 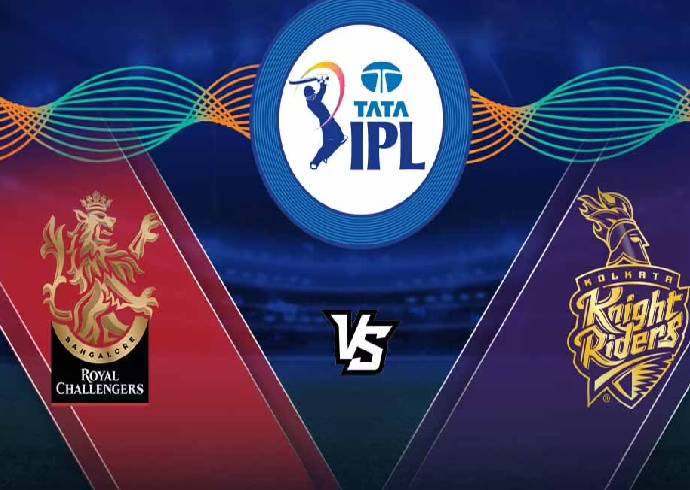 Also Read: RCB vs KKR Live Streaming: When and where to watch IPL 2022, Royal Challengers Bangalore vs Kolkata Knight Riders Live Streaming in your country, India

RCB vs KKR LIVE Score: For RCB, skipper Faf Du Plessis is in prime form after he made a scintillating 57-ball 88 and would like to continue in the same vein. Opener Anuj Rawat was unable to capitalise on a good start and would be aiming for consistency.

Unburdened by the captaincy pressure, Virat Kohli made a statement and played with more intent against Punjab. He will definitely look to rediscover his glorious touch and continue to torment the opposition bowlers like he did during his prime.

Wicketkeeper Dinesh Karthik also played a significant cameo and his role would be crucial once again, if RCB have to set or chase a big total. If these four go all guns blazing, then it would be a daunting task for the varied KKR attack.

While the KKR bowling unit will have to be particularly cautious of the six-hitting prowess of Du Plessis, which was on display on Sunday, RCB bowlers would have to quickly forget the hammering they received at the hands of the Punjab batters.

A profligate Mohammed Siraj, who leaked 59 runs, will have to pull up his socks. Another key bowler is death overs specialist and last edition’s Purple Cap holder Harshal Patel. Even the role of Sri Lankan spinner Wanindu Hasaranga, who is capable of spinning a web around the batters, could decide the fate of the match.

RCB vs KKR LIVE Score: For KKR, they ticked all the boxes in their lung-opener against CSK and they would be hoping that they can repeat their performance.

The biggest positive for KKR was Ajinkya Rahane finding his mojo and scoring runs. Although all-rounder Venkatesh Iyer managed only 16 runs in the first game, he is capable of pummelling any attack into submission.

Skipper Shreyas Iyer along with Sam Billings and Sheldon Jackson would need to shoulder responsibility in the middle-order.

On the bowling front, Umesh Yadav was sensational at the Wankhede. But others including Shivam Mavi, spinners Varun Chakravarthy and Sunil Narine would need to put up an improved show.

All-rounder Andre Russell’s role with the bat and ball could eventually be the difference between the two sides.

KKR are unlikely to tinker with their winning combination.

Being an evening game, dew would certainly be a factor and one can expect a high-scoring affair.